I was woefully unprepared.

It was the final part of my gap year; I’d spent the first three months as a volunteer living and working on a kibbutz in Israel, followed by 8 months back in the UK, during which time I worked for The Disney Store, volunteered with a youth group for teenagers with and without learning difficulties, and joined a similarly integrated drama group called WILD (We Injoy Loadsa Drama).

Indeed, I had spent my gap year testing my boundaries, putting myself into new situations, completely out of my comfort zone. Live and work in a foreign country? Sure! Work in a busy store to overcome shyness? Yes! Help run youth group activities? Why not! Act on stage with a drama company? Of course! Travel alone to Japan? OK! It was as if I was forcing myself to be more outgoing and adventurous, to create a new me.

Traveling to Japan for a month was not completely random. During my time on the kibbutz, I had made friends with a girl from Japan, and we’d kept in touch via letters. I thought I’d make the most of knowing someone there and take the opportunity to visit.

For the first week, though, I would be on my own in Tokyo.

As I said at the beginning of this post, I was woefully unprepared. I hadn’t even booked any accommodation, I figured I’d sort it out when I got there. Remember, this was 1994 and before the internet, so booking a hotel room or hostel or anything required either phoning or writing to them. I hadn’t bothered to do that.

Upon arriving at Narita airport, on that hot and sticky August day, after a long flight from London via Amsterdam, I made my way to a tourist information booth. I asked for help in finding a youth hostel in Tokyo. I didn’t know a single word of Japanese, and relied completely on the English ability of the person behind the desk.

Miraculously, they managed to book me into a hostel, and provided me with directions on how to get there. It was an hour and a half away, by train, and I had to change trains twice.

I still have the map and directions that they gave me, which I had stuck into a scrapbook to document my trip. I had to count the number of stops to make sure I changed in the right place. Trying to navigate my way around an alien transport system, while carrying a massive rucksack on my back in the hot, humid summer, was not my most pleasant of experiences, but, somehow, dripping with sweat, I found the correct building, in the middle of Tokyo, and checked into the Yoyogi Youth Hostel in the Shibuya district. 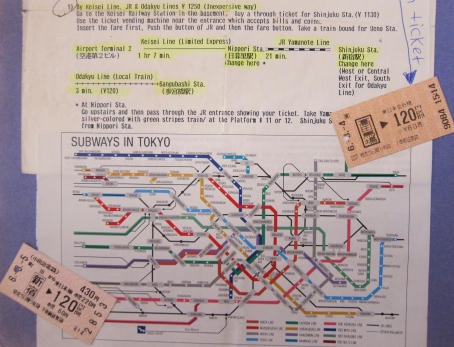 After settling into my dorm, I had one of the best showers of my life. The next day, as I was exploring the hostel I bumped into the only other Western face I had seen since my arrival. I can’t remember who said Hello first, but we quickly became friends.

His name was Gregoire, we were about the same age, and he was from France. Like me, this was his first time in Japan. He had been studying Japanese, so I realised that he would be a useful friend to have, to help navigate the city. He didn’t speak much English, but I knew schoolboy French, so we managed just fine.

We decided to explore Tokyo together. Over the following days we visited the Imperial Palace gardens, the National Museum of Modern Art, the Meiji Shrine, and managed to use the complicated metro system despite getting lost a few times.

We also tried out the Japanese-style public bath that was located just below the hostel. Gregoire explained that he had always wanted to come to Japan. It had been a lifelong ambition of his, so he wanted to experience as much of the culture as possible, including the baths. I wasn’t so keen at first, but it turned out to be very relaxing.

He had a family friend who ran a French restaurant in Tokyo, so he invited me to go along with him to visit. That’s how I found myself tucking into French-style steak, fries and peas in the middle of Tokyo. I didn’t like to say that I was mostly vegetarian, and as it was a free meal, I couldn’t really complain. I greedily ate it all.

The next day Gregoire was going to visit Mount Fuji, and I was heading off to make my way further north, to Fukushima, to visit my friend. We exchanged addresses, wished each other luck, and promised to keep in touch.

Unbeknownst to me, I had chosen to leave Tokyo on a national holiday. The train took me out into the countryside but then ground to a halt; I had to change trains. However, there didn’t seem to be any other trains coming or going. I hung around this tiny train station, which was surrounded by rice fields, in the middle of nowhere, wondering what I was going to do.

I started walking to the nearest buildings, which looked like traditional Japanese inns, and knocked on doors, asking (in English!) if they had a room available. Needless to say, I got turned away. I had no idea where I was or what my Plan B should be, and was about to head back to the train station, when a Japanese man appeared from nowhere and asked, in English, Can I help you?

I explained my predicament, and he invited me to spend the night at his home. Now normally, perhaps in other countries, this is not an option I would have considered, but Japan felt so safe, that I accepted this kind offer. That’s how I ended up sleeping in the spare room of the home of this kind stranger and his wife. After a good night’s sleep, I was able to catch a train the next day to go and visit my friend.

The remaining three weeks in Japan went much more smoothly. After returning home, I started my degree at the University of Plymouth. Gregoire and I remained friends by keeping in touch and we met up a few times in France and England. In July 1999 I was getting ready to go to Japan again, as a participant on the JET Program, and Gregoire had started a Japanese degree in Paris. He planned to visit me before I left, but a few days before his flight, he died.

Arriving in Tokyo a week later, in the same Shibuya district that Gregoire and I had met, was a surreal experience. Here I was, more or less accidentally teaching English in Japan, when it was Gregoire who had been passionate about Japan and learning Japanese; he should be here, not me I kept thinking. That summer I had the opportunity to climb Mount Fuji; I climbed it in memory of him. I had never expected to become friends with a Frenchman in Japan, but I’m so glad I did. I was still living in Japan a couple of years later and during a weekend trip to Tokyo I once again stayed in our youth hostel, only it had been completely rebuilt. It looked nothing like I remembered it.

5 thoughts on “A week alone in Tokyo”