Everyone who eats meat needs to read this book. It peeks behind the veiled world of animal factory farming, exposing the horrific methods in which meat is produced. Entwined within this is also the author’s own relationship with food, and in particular, the moving story of his Jewish grandmother who had fled from the Nazis in WWII.

After reading it, I have decided to drastically reduce the amount of meat that I eat.

The Affinity Bridge by George Mann

This had been sitting on my to-be-read pile of books for ages, ever since I found it in the Little Free Library, alongside its sequel. Essentially, it’s a Victorian steampunk mystery detective story, which rattles along at high speed. As I was reading it I thought that the story was written like a really, really good Doctor Who adventure, with it’s mix of engaging lead characters, Victorian fog-filled London, creepy robots and mysterious deaths. I was not surprised, therefore, to discover that the author has previously written Doctor Who stories and other works of science fiction. I’m planning to read the next book in the series soon. Highly recommended! 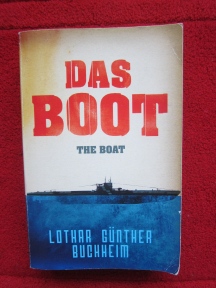 Considered a classic of its genre, this novel tells the story of fifty men on board a German U-boat during WWII. As stated in the introduction, although this is a work of fiction, the events in the book are based on the author’s own experiences.

I had been meaning to read this book for a long time, and as Remembrance Day was fast approaching I thought this would be a good as time as any to try to tackle it. My grandfather fought in the British navy during the war, mainly crossing the Atlantic, so it was interesting to read about that same experience but from the German perspective.

All I can say about this book is wow. I can see why it is something of a classic. The story is gripping and filled with so much detail that you can feel the tension, and easily picture what life was like being stuck on U-boat for weeks on end, living in cramped, intolerable conditions and under constant fear of being attacked.

The Gangster by Clive Cussler

I had never read any Clive Cussler books before; lots of them have passed through our Little Free Library book exchange, so I was aware of his work, and could see that he is a prolific and popular writer, but I hadn’t, until now, been interested enough to pick one up.

This one caught my eye, because it is set in roughly the same time period as The Affinity Bridge. It’s one in a series of Isaac Bell adventures, a detective working in New York in the early 1900s, trying to solve murders.

It was an interesting enough thriller, and kept my attention, but I’m not sure that Clive Cussler is really my cup of tea.