Second in a new series, looking at my favourite comedy shows. 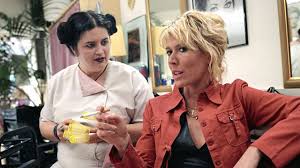 Nighty Night originally aired in 2004 on BBC Three before moving to BBC Two, and only lasted for two series.

This is probably my most favourite comedy show EVER.

It reflects my love of dark comedy (and believe me, Nighty Night is one of the darkest things you’ll ever watch).

I really admire and respect Julia Davis, who not only wrote the script, but also stars in it as the lead character Jill Tyrell, a narcissistic sociopath, who tries to seduce her married neighbour, no matter the cost…even convincing her husband that he’s dying of cancer… see, I told you it was dark.

Julia Davis is fantastic, but equally as good in this is her co-star, Ruth Jones, who plays Jill’s hapless salon assistant, Linda. Here’s a clip to give you a taste.